Did You Know – Genital Herpes in US -Facts and Myths

Did You Know – Genital Herpes in US -Facts and Myths

Genital Herpes in US -Facts and Myths

It is estimated that as many as one in five American have genital herpes, a lifelong (but manageable) infection, yet up to 90 percent of those with herpes are unaware they have it

Genital herpes is common in the United States and Statistics shows that one in five Americans have genital herpes, a lifelong (but manageable) infection, yet up to 90 percent of those with herpes are unaware they have it.  Most people who have genital herpes have no symptoms, however, it is important to know that even without signs of the disease, it can still spread to sexual partners. 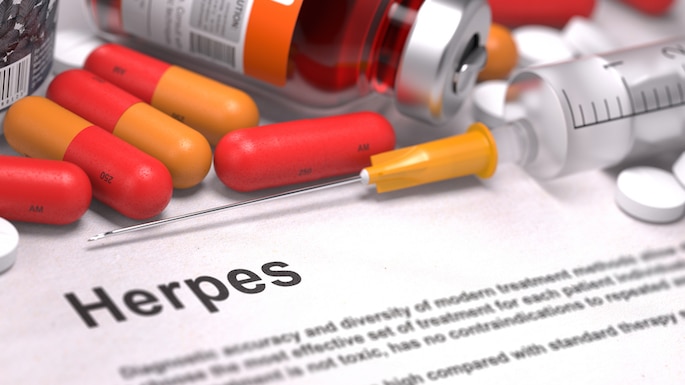 According to the Centers for Disease Control and Prevention (CDC), one out of every six people between the ages of 14 and 49, have genital herpes — and this is a lower estimate. Other sources estimate that one in five people are living with HSV-2. The STD is more common among women, with approximately one in four women infected (25 percent), versus approximately one in six men (16.7 percent). Still think herpes is rare? Think again.

2) I’ve been recently tested and came back clean, so I do not have herpes.

Unfortunately, because it is so common, the majority of STD tests do not screen for herpes. Most infections are visually diagnosed, and even then, physicians are right only 80 percent of the time. Interestingly enough, the CDC does not currently recommend routine type 2 HSV testing in someone with no symptoms suggestive of herpes infection, citing a lack of evidence that testing for the STD would curb the infection rate. Similarly, it is not clear whether knowledge of a herpes diagnosis improves the health of people taking the tests, as stress has been known to be a trigger for outbreaks.

Approximately 85 to 90 percent of those infected with HSV-2 exhibit little to no symptoms, which is whyas many as 90 percent of those infected with the virus have no clue they are carrying it, according to theAmerican Sexual Health Association. If you wish to know whether or not you are one of many unaware of your herpes status, you will need to specifically request to be screened for it, but note that the blood tests used to determine your HSV status are frequently inaccurate and a subject of debate among physicians.

While condoms can significantly reduce the chances of becoming infected with the virus, the only foolproof way to prevent an HSV-2 transmission is to practice abstinence. According to JustHerpes.com, there is only a four to 10 percent chance that those infected will transmit herpes during an asymptomatic period—even without a condom. With a condom, the chances plunge to about one or two percent.

During an active outbreak, however, the chances of transmitting herpes during unprotected sex may be as high as 75 percent. Using a condom will significantly reduce those chances (to about eight percent), but because herpes is transmitted via skin-to-skin contact, and condoms leave parts of the genital region exposed, it is still possible to contract the virus while using a condom.

4) Women with herpes cannot have a natural birth.

One of the most frequently asked questions among recently diagnosed women pertains to pregnancy. Luckily, the majority of women who become pregnant and have herpes go on to deliver healthy babies. So long as the mother carrying the virus is not experiencing an outbreak during the time of a vaginal delivery, it is extremely unlikely that she will pass herpes along to her newborn.

Although there is little risk of transmitting the disease to a newborn during an asymptomatic period, it is still important to let your physician know about your STD status, so that he or she can monitor symptoms closely. If at the time of labor you are experiencing an outbreak, a physician will likely recommend a cesarean section (c-section).

5) Only promiscuous men and women get herpes.

Although having sex with multiple partners will increase your chances to exposure, any sexually active person can contract herpes. As with all sexually transmitted diseases, herpes can be transmitted from just one sexual encounter. One of the most common misconceptions about herpes is that it only affects men and women who have many partners, but that is just simply not true. In fact, there are even a few reported instances of virgins contracting the disease orally.

Although it is much more difficult to contract HSV-1 genitally, it is not impossible. This is especially true if the person administering oral sex is suffering from a cold sore. Moral of the story? Nobody ever wishes for herpes, but a diagnosis is not contingent on your sexual history, so withhold your judgment!

6) A herpes diagnosis means you can kiss your love life goodbye.

Most people who are aware and open about their status will tell you that dating with herpes is hard. While it is probably true that disclosing your STD status will deter a few partners, a herpes diagnosis is not the end-all be-all of your love life. Many infected individuals have fulfilling sex lives, and oftentimes, with individuals who do not have herpes.

Honesty is always the best policy, but because there is such a stigma associated with herpes, many of those living with the disease are afraid to disclose their status. This is why it is incredibly important that we all do our due diligence and educate ourselves. As previously mentioned, there is only a four to 10 percent chance that those infected with the virus will transmit herpes during an asymptomatic period—and that is without a condom. With a condom, the chances plunge to about one or two percent.

7) Herpes is something to be ashamed of.

As if living with herpes wasn’t crappy enough, many of those who have become knowingly infected are ashamed of their status—some even battle suicidal thoughts. Subtle jabs in mainstream media and Hollywood movies (i.e. The Hangover) aren’t helping the herpes cause, either.

In the grand scheme of things, herpes, though potentially uncomfortable, is merely a skin condition and it’s time we acknowledge the stigma, so that we can get the conversation going once and for all.

So how will you know if you have genital herpes and what will happen if  you don’t get a treatment? Have a better understanding about herpes by reading the link below.

How do I know if I have genital herpes?

Genital herpes sores usually appear as one or more blisters on or around the genitals, rectum or mouth. The blisters break and leave painful sores that may take weeks to heal. These symptoms are sometimes called “having an outbreak.” The first time someone has an outbreak they may also have flu-like symptoms such as fever, body aches, or swollen glands.

Repeat outbreaks of genital herpes are common, especially during the first year after infection. Repeat outbreaks are usually shorter and less severe than the first outbreak. Although the infection can stay in the body for the rest of your life, the number of outbreaks tends to decrease over a period of years.

You should be examined by your doctor if you notice any of these symptoms or if your partner has an STD or symptoms of an STD, such as an unusual sore, a smelly discharge, burning when urinating, or, for women specifically, bleeding between periods.

How will my doctor know if I have herpes?

Often times, your healthcare provider can diagnose genital herpes by simply looking at your symptoms. Providers can also take a sample from the sore(s) and test it. Have an honest and open talk with your health care provider and ask whether you should be tested for herpes or other STDs.

Can herpes be cured?

There is no cure for herpes. However, there are medicines that can prevent or shorten outbreaks. One of these herpes medicines can be taken daily, and makes it less likely that you will pass the infection on to your sex partner(s).

What happens if I don’t get treated?

Some people who get genital herpes have concerns about how it will impact their overall health, sex life, and relationships. It is best for you to talk to a health care provider about those concerns, but it also is important to recognize that while herpes is not curable, it can be managed. Since a genital herpes diagnosis may affect how you will feel about current or future sexual relationships, it is important to understand how to talk to sexual partners about STDs. You can find one resource here: GYT Campaign.

If you are pregnant, there can be problems for you and your unborn child. See “I’m pregnant. How could genital herpes affect my baby?” above for information about this.

Can I still have sex if I have herpes?

If you have herpes, you should tell your sex partner(s) and let him or her know that you do and the risk involved. Using condoms may help lower this risk but it will not get rid of the risk completely. Having sores or other symptoms of herpes can increase your risk of spreading the disease. Even if you do not have any symptoms, you can still infect your sex partners.

What is the link between genital herpes and HIV?

Genital herpes can cause sores or breaks in the skin or lining of the mouth, vagina, and rectum. The genital sores caused by herpes can bleed easily. When the sores come into contact with the mouth, vagina, or rectum during sex, they increase the risk of giving or getting HIV if you or your partner has HIV.

What is the link between genital herpes and oral herpes (cold sores on the mouth)?

Oral herpes (such as cold sores or fever blisters on or around the mouth) is usually caused by HSV-1. Most people are infected with HSV-1 during childhood from non-sexual contact. For example, people can get infected from a kiss from a relative or friend with oral herpes. More than half of the population in the U.S. has HSV-1, even if they don’t show any signs or symptoms. HSV-1 can also be spread from the mouth to the genitals through oral sex. This is why some cases of genital herpes are caused by HSV-1.

Dating with genital herpes doesnt have to be hard, start over and feel normal again with Meet Positives, a community for people with herpes hsv1 hsv2.  Join Today!

Getting tested for STD is a basic part of staying healthy and knowing your status and your partner will show that you care. It’s important to know your risk and protect your health and your partner’s health. In some cases, couples in long-term relationship suspects that their partners has been cheating when she or he is diagnosed. However, the truth is your partner could have been infected years or decades before you met.

About the Author: gean